Read more
The store will not work correctly in the case when cookies are disabled.
Skip to the end of the images gallery 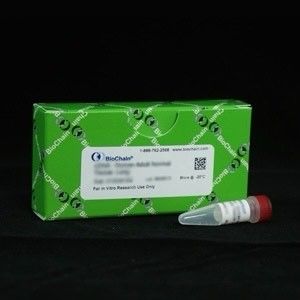 Need help with your order?

Find out more about placing an order here or contact us for technical support.
Pricing is for US customers only. For international pricing, please contact your local distributor. View Distributors Here.

BioChain's tissue genomic DNAs are isolated from a wide variety of tissues using a proprietary modified guanidine thiocyanate technique. The quality and purity of genomic DNA are tested by spectrophotometer and electrophoresis. A260/280 is between 1.8 and 2.0, and A260/230 is >2.0 (detected in 10 mM Tris-Cl, pH 7.5). Contamination of RNA, polysaccharides and proteoglycans has been effectively eliminated.
Looking for multiple donors or additional samples?